Swift Meat Packing Plant
Fort Worth, TX
Furtive. Is that the right word? I'm not certain I know what furtive means, but this endeavor feels like what I think furtive is; parking illegally, walking the filthy street past derelict buildings and rusty chain link fences, looking over my shoulder for passing police cars. Feels like I'm on the west side of Chicago in the 80's. Or, maybe the west side of Chicago today. Really, no amount of re-gentrification of Chicago's fringes will ever reach Lake Street. Driving down Lake you'll find broken down cars and frightening empty buildings interspersed with the occasional Mercedes S Class. You do the math. In an ABC News Report in 2010, the neighborhood around West Lake Street beat out the worst of Atlanta, Cleveland and DC for crime. Time for some, "We are #1" graffiti.

But, I digress. I'm 1000 miles, or so, give or take, more or less, from Chicago. This is Fort Worth, Texas. Ducking through a torn section of chain link, I'm counting on the Fort Worth police being more forgiving than Chicago's finest. And, looking at my destination, I'm wondering what they think they'd be protecting. Me, I guess.

It's the derelict Swift Meat Packing plant. The sprawling complex sits abandoned at 400 E. Exchange Ave, alongside the Armour Company plant on the east side of the Fort Worth Stockyards. Opened in 1903, it once represented economic boom times. Now shuttered for over 40 years, pretty much only drug users, wayward teens and urban explorers find reason to visit this place. I suppose I fall into the urban explorer category - photography bringing me here - places like this fascinate me. Have you ever seen that History Channel television program, Life After People, where they attempt to show how nature would take over? This is the realization of that idea. The full grown trees now rooted on the roofless top floor are a tribute to the power of nature. I find an odd sense of peace being alone in the darkness. I began learning that early. My mother, being the mom that she wasn't, once left me at a JC Penney store when I was about 8 years old. I had five siblings - maybe any mom would have had trouble keeping track of everybody.

It was major news in 1901 when Armour and Swift agreed to build regional plants in the Stockyards. By 1909, the plants were processing 1.2 million cattle and 870,000 hogs per year as well as sheep, horses and mules. Horses and mules? I guess. Hopefully for dog food, but you'd be excused for considering vegetarianism. By 1910, people were coming from all over the world to work here, Yes, back in the day there were people that actually wanted to live in Fort Worth. The Stockyards hit their heyday during World War II, but the rise of the trucking industry after the war spelled the demise of railroad-centered packing plants.

Armour shut its plant in 1962; Swift held on until 1971. Since then, the abandoned property has been host to an Old Spaghetti Warehouse restaurant, a filming location for the television programs, "Prison Break" and Chuck Norris’ "Walker Texas Ranger" and now a fairly realistic depiction of a post apocalyptic world. 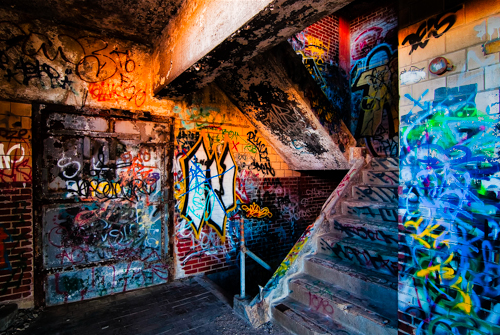 The complex includes a handful of structures in varying states of decay. Entering the main building, it's hard to imagine animals were led to the fourth floor via ramp, and processed floor by floor, until they came out the main floor as packaged meat. Do you think the animals on their way in were eyeing the packages on the way out and thinking, "Something's not right here," like The Far Side cartoons?

The brick floors remain, albeit none of the bricks are actually attached any longer, adding an echoing click and clack as you pick your way through the debris. Your own horror movie soundtrack. I began by making my way into the basement. Imagine a space so dark that even a flashlight struggles to light more than a few feet in front of you. I was thinking that this would be a great place to hide a body - bring the body and a bag of lime, leave the shovel in the trunk - that led me to turn around and go with the upper floors instead.

There's some okay graffiti in here. Being a graffiti snob, I can't call it great. I suspect most graffiti artists tag for credit and accolades. Sorta makes tagging the inside of hell a low priority. Peeling paint like wilting flower petals cover the ceilings occasionally fluttering down around you. The huge, rusty steel, refrigerator doors closing off the stairwells are like works of art. How scrappers haven't walked off with them yet, is impossible to imagine. Peering into the internal, windowless rooms, conjures up images of the zombies in "I Am Legend".

As I was kneeling down to capture the reflection in my photos, I tried not to even think about what's in the one inch of water covering most of the floors. Asbestos? Bodily fluids? Rain water? Yeah, that's it. Rain water.