The old, tin can drew me in

A 1960 Comet Relief trailer, I believe. Like most people, I romanticize almost everything about the first ten years of my life. You name it.
Cartoons?
Clutch Cargo. Davey and Goliath. The real Scooby Doo.
Cars?
The 1963 Corvette Stingray hard top in silver with the split back window. More useful perhaps, a pale green and off white VW Bus.
Music?
Eight tracks. The Stones Altamont concert debacle. David Bowie Space Oddity. Almost anything by the 5th Dimension. A Boy Named Sue by the great Johnny Cash. Led Zeppelin - debut album 1969 - I still listen to it today.
Movies?
Dave: HAL?
HAL: Affirmative, Dave. I read you.
Dave: Open the pod bay doors, HAL.
HAL: I'm sorry, Dave. I'm afraid I can't do that."
2001: A Space Odyssey - Prophetic.
The Birds - terrifying. Easy Rider - the heighth of cool.
Fashion?
Who didn't like bell bottoms? I'd probably wear them today, if my daughters wouldn't lose their minds. They'll hardly be seen with me as it is.

Oh, crap, wait, I digress, this post was about food. Back to the Comet trailer. Searching for a lunch destination in Austin prior to the opening of the Austin City Limits festival, I was faced with a myriad of choices, but it's Texas, and Texas barbecue is high on my list. And, I've been to so many places. On to (and, onto) Google, Yelp, Urbanspoon, Austin Monthly I go. You have to create some form of algorithm out of all reviews to land on a place you can pin your hopes on. And, my search brings up some of the usual, awesome places, but the one that catches my eye first isn't due to the raving reviews. I get there eventually, but first I'm caught up by the 1960's.

Micklethwait Craft Meats (the 'th' is silent - go figure) is housed in a 1960 Comet Relief trailer. Comet trailers fall smack in the middle of my romantic recall. Oh, yeah, sure an Airstream would be even better, but we were poor, and this trailer screams, hellish 1960's family camping trips. We couldn't even afford one of these, but aspirations being what they are, it wasn't as out of reach as going to the moon, which it ultimately turned out wasn't so far out as we thought. More great 1960's. So, the photo of trailer drew me in. Especially since waiting in line at Franklin Barbecue was out of the question. It's worth the wait, and I'll wait for things, but not in the pitch your tent and tough it out sense, when my bucket list is as long as my arm and time is short. And, on this day there was music to be had.

The trailer drew me in, but the barbecue will keep me coming back. Tom Mickle­thwait's vintage 1960 Comet tin can trailer, is paired with a trailer holding a smoker, and is set on a sparse piece of land not far from Franklin's at 1309 Rosewood Avenue, Austin. If the line at Franklin scares you too, drive on, my friend. I'm not actually a food critic, so I can't get into details and use words like acerbic, saccharine or even, zesty, but I can tell you that the brisket was amazing. Absolutely, melt in your mouth, amazing. Nice crust. Good mix of fat. I'll go back again and again. The pulled pork was equally good - soft and flavorful. They home make the bread - so it's not just a decoration but a valuable aspect of the meal. The sides were great, too - including a tangy (foodie word) cole slaw and jalapeno cheese grits. Get the grits every time. One of my favorite parts of the whole place was the story of how Tom Miklethwait started at this endeavor. You can find his Kickstarter pitch to potential investors here. The guy works 60-100 hours a week at this passion. God bless him. Plus, you get to see that awesome 1960 Comet trailer before it was fixed up and painted.

Get there as soon as they open. Good barbecue goes fast in these parts. By 2:00pm the pickings will be slim. 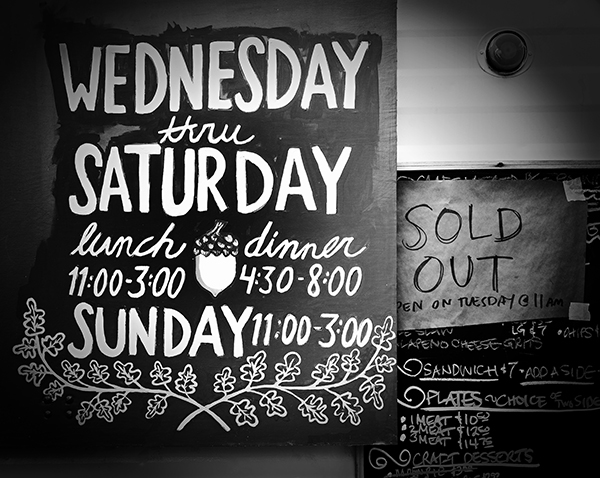